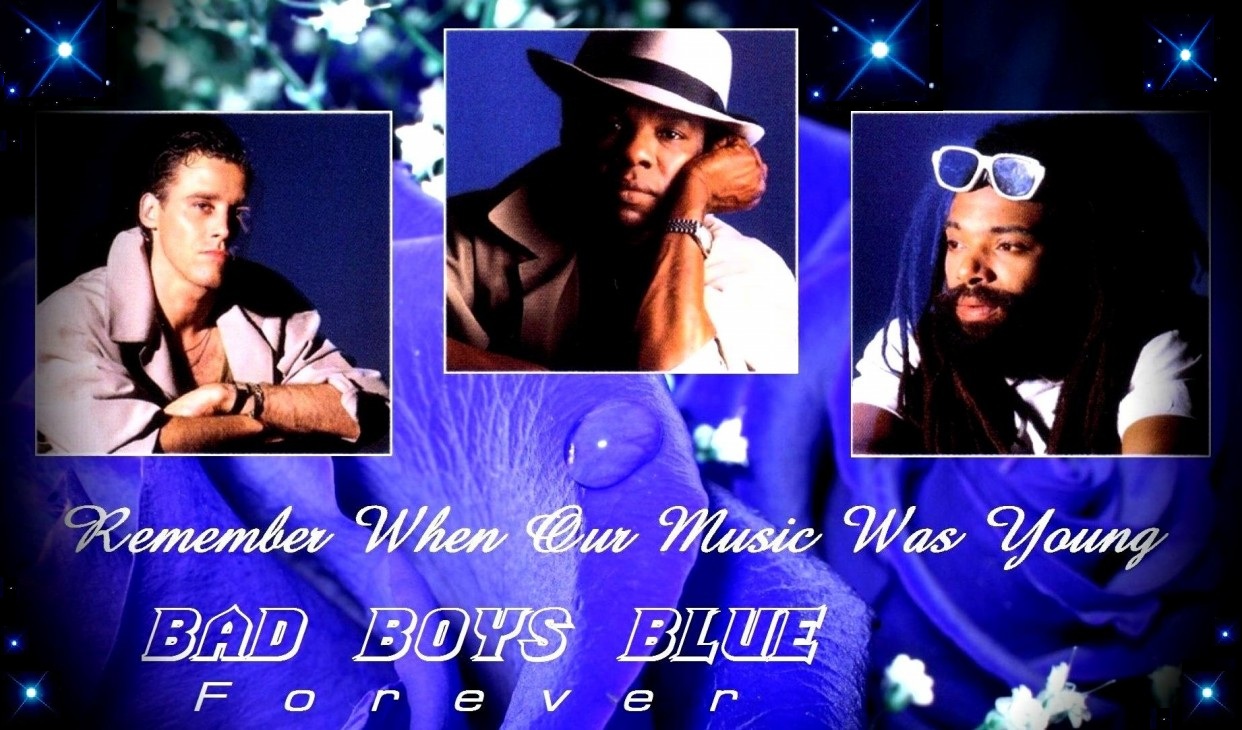 Bad Boys Blue are a multinational pop group that was formed in Cologne , Germany. The group performed many international hits including ” You’re a Woman “, “Pretty Young Girl”, “I Wanna Hear Your Heartbeat”, and “Come Back and Stay”.

Bad Boys Blue was formed in the summer of 1984 by German producer Tony Hendrik and his lyricist wife Karin van Haaren. The original trio consisted of Jamaican Trevor “Supa T” Taylor (the original lead vocalist),Briton John McInerney, and American Andrew Thomas. Their debut single “LOVE In My Car” failed to make an impression in the pop charts but the follow-up ” You’re a Woman ” was a success, reaching the top 10 in many European countries.

The group became massively popular in Eastern Europe and South Africa, with the band performing to sell-out crowds in Russia and Ukraine. In contrast, the group never charted in the UK, and their only charting US singles were “Save Your Love” (1993) and “Luv 4 U” (1994) which became successful chart hits. Those singles were from two of their albums that were released stateside: Bad Boys Blue (1993) and To Blue Horizons(1994).

The group has experienced numerous line-up changes. In 1988, Trevor Taylor left the group a year after being gradually demoted from his role of the lead singer. He was asked to rejoin the group the following year just for recording sessions for the “Hungry for Love” single that was to be featured on the group’s first compilation album Bad Boys Best . Trevor Taylor’s departure permanently secured John McInerney ‘s position as the band’s new lead vocalist. Trevor Taylor was replaced by Trevor Bannister (born August 5, 1965 in Grimsby, England),  whose function in the group was mainly to perform Trevor Taylor’s hits in live gigs. It is during Bannister’s tenure with the band that Bad Boys Blue began touring in Eastern Europe thus gaining much popularity there. Trevor Bannister left in 1993 and the remaining two members performed as a duo. During its entire South African tour, the duo was briefly joined by Owen Standing, who left the group shortly thereafter, and therefore was not considered to be a permanent band member. Multi-talented Irmo Russel (born March 15, 1956 in Aruba, Caribbean Sea) joined the group in 1995, who in addition to stepping into Bannister’s shoes was instrumental in revitalizing the group’s creative potential, by becoming a composer, video director, and occasionally assuming the role of lead singer on some of the tracks. At the end of 1999, Kevin McCoy ( stage name JoJo Max) replaced Irmo Russel by joining Bad Boys Blue full-time after being the group’s rapper since 1998, but left in early 2003 leaving Bad Boys Blue as a duo again. However, in 2005, Kevin McCoy rejoined Andrew Thomas’ Bad Boys Blue line-up.

In 2005, McInerney and Thomas split under less than amicable circumstances. Andrew Thomas went on to form an all-American version of Bad Boys Blue with former member Kevin McCoy and new lead singer (no relation), and they were said to be working on a new release, with Kevin McCoy being the trio’s producer. Andrew Thomas’ formation of the band was named “The Real Bad Boys Blue”. Their shows were based on the full playback including original music produced by original producers, lead vocals by John McInerney and backing vocals by studio session singers.

John McInerney kept performing as Bad Boys Blue; at first he performed solo with a live group and backing singers but in the following year he was joined by Carlos Ferreira  (born April 11, 1969 in Mozambique), and this presently UK-based, duo set out to work on a new album, with the French producers MS Project. Trevor Taylor, the original lead singer of Bad Boys Blue, died of a heart attack in his home in Cologne on January 19, 2008 at the age of 50.

Bad Boys Blue, in May 2008, released a brand new album called Heart & Soul with 13 new original songs. The album was supported by the release of two maxi-singles: “Still in Love” and “Queen of my Dreams”. In May 2009 this formation resumed cooperation with its original label, Coconut Music, in addition to working with its current production team.

The Real Bad Boys Blue, in June 2008, experienced significant changes in personnel. This formation was essentially split in two when Herb McCoy left the group to continue performing solo, but under his own name, using his own versions of some Bad Boys Blue songs. At the same time, Kevin McCoy became the new lead singer of the remaining duo, and a new member, Jeremy Cummins, was added to this group’s line-up. This version of the group completed recording of several brand new tracks, all penned and sung by Kevin McCoy.

On June 19, 2009, Coconut Music/ Sony Music released a special remix album titled Rarities Remixed . The album contained modern remixes of some hit singles and album tracks. On July 21, 2009, Andrew Thomas died in Cologne at the age of 63. John McInerney is now the only member alive from the original line-up of Bad Boys Blue. On October 30, 2009, Coconut Music/Sony BMG released a special compilation titled “Unforgettable”. The item was dedicated to both original members of Bad Boys Blue who died, Trevor Taylor and Andrew Thomas.

In December 2013, Bad Boys Blue announced on their page that they are working on a new album. Some of the songs are already completed and the remainder will be complete by January/February 2014. Some of the song writers will be: Pawel Marciniak, Mattias Canerstam and Johann Perrier. In June 2015, Bad Boys Blue have released a new album titled “30.” It contains 4 new and 4 unreleased songs, along with some remixes of older songs.